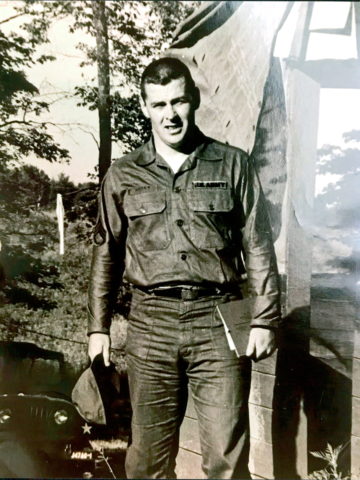 Departed on November 13, 2019 and resided in Gallatin, TN

Raymond E. Horky, age 79 of Gallatin, passed away November 13, 2019. Raymond was born in Springfield, MA on February 28, 1940 to the late Jules and Mildred Horky. After graduating from West High School, he attended Iowa State University on a football scholarship where he excelled at his position of tight end. Raymond was a veteran of the United States Army, honorably discharged at the rank of Sergeant First Class; he was proud of his military service and was a true patriot and supporter of the United States and The Ohio State University Buckeyes until the day he died. He was a firefighter for the city of Columbus, Ohio for 34 years; he was an avid hunter and enjoyed going on big game hunting trips with his uncles and brother; he enjoyed fishing and loved being on the water. His family will remember him for his gregarious personality; he could always light up a room with his great sense of humor and had a way to make everyone feel special. Ray was an extremely hard worker and a great provider for his family. He is survived by his loving wife of 55 years, Carol Horky; daughters, Carrie Wood (David) of Bellville, OH, and Lorrie Hudson (Bobby Franco) of Gallatin, TN; grandchildren, Emily Wood-Howard (Micah) of Knoxville, TN, Austin Hudson of Gallatin, TN, Carson Wood of Nashville, TN, and Hannah Hudson of Gallatin, TN; great-grandchild, Baby Howard on the way in May 2020; loving sister, Carol Stacy (Frank) of Cave Creek, AZ, and brother, John Horky of Morehead City, NC; several loving brothers-in-law, sisters-in-law, great Aunt, nieces and nephews. In accordance with his wishes, Ray’s cremated remains will be laid to rest in a private ceremony at Hendersonville Memory Gardens in Hendersonville, TN. A life celebration honoring his life will be held at a later date in Columbus, OH. In lieu of flowers, memorial donations may be made to the Alzheimer’s Association. Arrangements Entrusted To: Crestview Funeral Home and Memory Gardens, Gallatin, TN Phone: (615)452-1943 www.crestviewfh.com