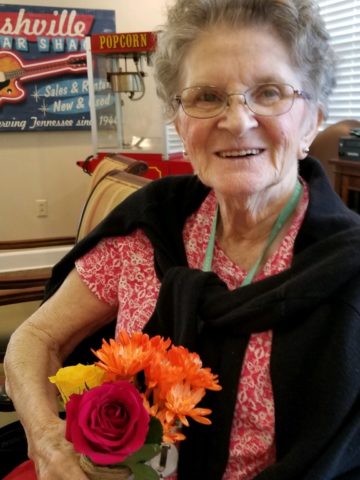 Departed on February 6, 2020 and resided in Hendersonville, TN

Patricia Ann Frazier Ehmcke, age 84 of Hendersonville, TN and formerly of Saginaw, MI, passed away February 6, 2020. Mrs. Ehmcke was born in Saginaw, Michigan on August 12, 1935 to the late Howard and Marguerite Frazier. Mrs. Ehmcke lived in Saginaw most of her life until recently relocating to Tennessee to be near her family. She was active in the First Nazarene Church in Saginaw for many years, enjoyed being a foster parent and was a talented seamstress. She loved her family dearly and would always do anything that was needed for them. In addition to her parents, she was preceded in death by her husband, Leonard Ehmcke in 2014; son, Leonard Ehmcke, Jr.; and sister, Carole Kade. She is survived by her daughters, Nancy Sanderson (Kevin) of Gallatin, TN, Donna Dzuba (John) of Colorado Springs, CO, and Tobi Ehmcke of Saginaw, MI; grandchildren, Amber Sanderson, Jonathan Dzuba, Justin Dzuba, and Nathaniel Schumann (Kayla Pfau); great-grandchildren, Anden Dzuba, Westin Schumann and Chase Schumann; siblings, Linda Klump, Sharon Brown, Gloria Bedore, and John Frazier. Mrs. Ehmcke will be laid to rest at a later date beside her husband at Roselawn Memorial Gardens in Saginaw, Michigan. Arrangements Entrusted To: Crestview Funeral Home and Memory Gardens, 1623 Highway 109 North, Gallatin, TN, Phone: (615)452-1943 www.crestviewfh.com