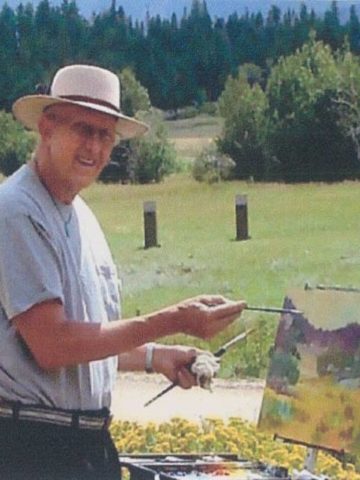 Departed on September 22, 2020 and resided in Gallatin, TN

Dr. Joel Knapp, DDS, 81, passed away after a sudden illness on Tuesday, September 22, 2020.
He was born to Joseph and Francis (Kuzmitz) Knapp on July 15, 1939 in Gary, Indiana. He played football and basketball for Horace Mann High School and football for Valparaiso University. He studied dentistry at Indiana University and upon graduating he was drafted to the medical corp for the Vietnam war, from which he was discharged with honors.

He practiced dentistry in Valparaiso, IN until 1978 and then practiced in Hendersonville, TN until his retirement. He also professionally fished and oil painted until his passing. He was a passionate teacher of his art and traveled extensively world-wide, competing in Plein Aire contests. He loved to compete and was active in running, and later triathlon.

Joel uses lively color with oil paint in an impressionistic style to capture a feeling of time and place. A devoted plein air painter who feels the essence of the place as he captures it by paining on location. He may be found traveling in his camper with easel and paints in front of mountains, rivers, and landscapes of all types, in cities painting city scapes and sidewalk cafes by daylight and streetlight.

Joel says of plein air painting, “It is such an honest approach to see the light as it hits the scene. The wind in your face, flies in your paint and a few hours to create a paining: one must paint fast and loose, go in with your feelings, but using your brain and experience to balance colors, to vibrate and sing, Hallelujah.”

Joel teaches plain air painting at his studio in Gallatin, TN and around the country. Joel feels if he can make the viewer of his work “feel good” he has given a blessing to that person.

Joel will be remembered for his warm and energetic sociability, his honest commentary, his enthusiasm, his generosity, and his love of family, travel, arts, and competing in sports.

He was preceded in death by his parents; his son: Thomas Erik Knapp; his mother and father-in-law: Lloyd and Grace Sines. He is survived by his wife of 60 years: Karen (Sines) Knapp; his sister: Frances Knapp (Bartlett, IL); their daughter Jennifer (Knapp) Clark (Rocheport, MO); their son Timothy Knapp (Castalian Springs, TN)); his grandchildren: Kyle Knapp, Jonathan Clark, and Corlin Clark; his great grandchildren: Payton Clark, Harper Clark, and Thomas Clark. He left behind many family, friends, and his Bugg Hollow Plein Aire painters.