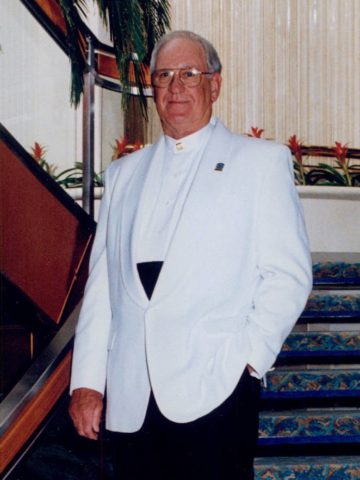 Departed on May 13, 2019 and resided in Hendersonville, TN

Lt. Col. Charles E. “Gene” Lambert, USAF Retired, age 86 of Hendersonville, passed away May 13, 2019. Gene was born on January 10, 1933 in Crenshaw, Mississippi to the late C.L. Lambert and the late Ruth Barham Lambert. He was a graduate of Crenshaw High School where he played football, basketball, and baseball; he was named Mr. Crenshaw his senior year. After high school he attended Mississippi State University where he was a member of the ROTC program and the Sigma Chi Fraternity; he graduated with his bachelor’s degree in 1954. In July of 1954, Gene joined to United States Air Force. While in the Air Force, Gene rose through the ranks and was given several awards; some of those being for excellence in marksmanship and leadership; he also received the highest score ever recorded in radar instructor training. Gene retired from the Air Force, joined the Air Reserve and later the Air National Guard; he retired in 1993 at the rank of Lieutenant Colonel. He was employed for many years at Texaco, Inc. He retired from Texaco after 23 years and entered the convenience market business for several years eventually selling them all in 2002 and retiring completely. He and Joyce traveled for many years as his health allowed; he enjoyed golf and tennis; Gene was also a longtime member of First Baptist Church Hendersonville. Gene was a loving husband, father, and grandfather; he will be deeply missed. In addition to his parents, Gene was preceded in death by his sons, Chuck and Steven Lambert; and his sister, Sara Gowen. He is survived by his wife of 59 years, Joyce Lambert; daughters, Lisa Netherton and Lesli Lassiter; 6 grandchildren; 7 great-grandchildren; and brother, Jim Lambert. A Life Celebration Service honoring Gene will be held on Monday, May 20th at 12:00 P.M. in the Chapel at First Baptist Church Hendersonville. Visitation with the family will be on Monday from 10:00 A.M. until time of service. In lieu of flowers, memorial donations may be made to the First Baptist Church Hendersonville Library of the Wounded Warrior Project. Arrangements Entrusted To: Crestview Funeral Home and Memory Gardens, 1623 Highway 109 North, Gallatin, Phone: (615)452-1943, Obituary Line: (615)452-7589 www.crestviewfh.com